The Moires or Fates busy spinning our fate

At 3AM in the night – American ET 9PM – a House Representative from Georgia, Marjorie Greene, filed impeachment documents against new US president Joe Biden. She states he is unfit to be the president, because he is corrupt and is harming the country. Meanwhile there is also an impeachment trial waiting for Mr. Donald Trump, even if he isn’t anymore in office. The Democrats don’t want him ever in politics again and so they charge him with the run on the Capitol which was clearly not his fault. He was actually the one who wanted more police there on the 6th of January, while the Democrats didn’t want that. They knew Antifa would come and now deny everything. Difficult people, but I do understand how many people think and why they don’t see the truth about Mr. Trump and the GOP.

Here is where I found the news about the impeachment: on Gateway Pundit. Underneath her message on Twitter and also in the Gateway Pundit you can see many people are with her and have hope she will succeed. I am one of them, even if my feeling for reality says much more is needed to finally get away the Democrat top from power. The fact that Biden signed 17 (and someone even said 25!) executive orders to destroy the whole work of his predecessor is a hostile action against the Republicans. He may say he wants unity and healing, but he does quite the opposite and that is the worst he can do for the country. The man clearly wants and strives for civil war.

My statement on introducing Articles of Impeachment against President @JoeBiden: pic.twitter.com/1mq7QRBbTX

What I see and feel now that there is a Democrat government, is that many people are relieved: things are getting “normal” again and many coloured people think it’s their time now. This is so sad actually, because the Democrat-loving Woke movement with anti-racism and gender equity is exactly against equality among people. They even use the word equity, which means positive discrimination and not everyone is equal. For the Republicans everyone is truly equal, but many coloured people don’t see that. They see lots of white people there and don’t understand this is because there are about 65% white people in the US and a lot more mixed and also more or less white. And then about the Greeks: we are officially white, but as South-East Europeans we are also half Middle East in our thinking and most of us feel better in a mixed environment than with only Northern people around them. I think that is another reason why they choose so often for the Democrats. Plus coloured and not-Northern European people feel safe in an environment where they receive this positive discrimination which helps them make a career. But it’s far from honest! It’s just nonsense that white people would supposedly be racists by nature. Quite the opposite. The man who truly fought and still fights for equality, is Donald Trump. His wife is also from the Balkan, don’t forget that either.

This here is a tweet from a Republican lady who calls for justice against the rioters who were busy at work tearing half of the country down. Democrats had foretold that angry Republicans would go looting, but forgot Republicans are the people who are against looting and rioting. Demonstrating yes, but always peaceful. Rioting. looting and using violence is something for Antifa. They even have professional equipment for it and see it as their work!

I was told for a week Trump supporters were going to incite violence in all 50 states and DC needed 10 million soldiers.

Yet here we are watching liberals flip cars, light’em on fire, bust windows in Seattle and Oregon.

The hypocrisy is thick.

Now that there is a Democrat government, many people who think they never had a chance with president Trump’s administration, think it will be their turn now. But it was exactly with the Trump administration that they had chances. Biden has immediately stopped all oil fracking and has closed down the most used pipeline. Thousands of people lost their job unexpectedly and are on the street! Isn’t that terrible? And then about that Covid pandemy: now masks are prohibited everywhere and everyone must listen to Biden. He is the president for the whole country, he said and he didn’t mean that would be good. No, he meant that he will force the whole country to listen to him and not open their mouth with criticism. It will be like here in the Netherlands: all shops closed in all states, all restaurants closed, people losing their jobs and their businesses, for sure the vaccine will also be mandatory and after the virus will be “dominated”, the the Great Reset will start. All businesses gone, all people in poverty and misery and he and the other corrupt Democrat top people get all the money. Tax money will go to totally dumb climate projects while the population doesn’t have anything to eat. So there is nothing to feel safe about and people will find out when it’ll be too late. Very sad!

House Representative Marjorie Greene is immediately in the news in the whole country. She dares act against the Allmighty Democrat King Biden, so now all lies and conspiracy bogus must be digged out of their graves. Oh yes and she believed the Parkland shooting incident in 2018 was set up, as almost all Republicans think. It was a horrible, horrible shooting at a school in Florida where many students were sadly killed. There were quite a lot of indications that George Soros had organised this in order to force a law against gun permission. It wouldn’t be the first time this man did such terrible things to get his will done, but the mainstream media is payed and owned by Soros and of course they didn’t want the scandal to come out. And the American people were so shocked by the incident itself that they couldn’t also believe it was a set up by Soros of whom they are led by all media to believe he is an innocent angel and philanthropist.

There was another shooting as well, in 2012: the Sandy Hook shooting, also at a school but in Connecticut. I remember the horror story, but not that there was another version as well. This time the other version said the shooting by a disturbed young 20 year old boy hadn’t taken place at all. I guess that was because they couldn’t believe such a terrible thing could really happen. Marjorie Greene believed the other version and now the newspapers are full with that story instead of telling the real story about why she filed that impeachment against Joe Biden. I think it’s tasteless to dig up such awful stories from the past, only to make her look bad. Ask her about the point she has instead of always that stupid bashing of anyone who isn’t a Democrat!

Anyway: the documents have been filed and now it’s waiting again. For two impeachments! It is really a fight for what is strongest: honesty or corruption. It does keep us busy, I can’t say anything else.

America: the future of the world 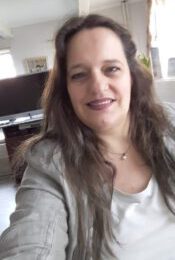