I woke up this afternoon – went to sleep around 7 AM – by a Whatsapp message from my son, who wished me a good morning. At his school not the direction, but the students and parents themselves complained about the fact that keeping 6ft distance is impossible at school. Now the school decided no-one shall be there, only for exams. It’s exam week, that’s why. There are already no lessons, only online! In this country it’s the population that is dumb, a bunch of chickens and they live like zombies only keeping The Rules and nothing else. Many, many people actually spy on their neighbours if they maybe receive more guests than the Covid restrictions allow and phone the police if they see something. It really feels like WWII started all over again. Fortunately in America there are many more courageous people than here and I’m right now listening to and watching them at Right Side Broadcast Network on YouTube.

Normally you would think everyone would be sad and depressed seeing their president leave office. But no, they keep courage and are full of energy to fight even without him. Of course we don’t know how they will be tomorrow when Joe Biden starts tearing down everything Donald Trump achieved. Tax raises, idiotly severe Covid restrictions just like here, a ban on weapons for people to defend themselves – very much needed in the US! – and war and chaos everywhere in the world. Businesses destroyed, millions of people unemployed and all the government money will be going to the “climate” which isn’t even a problem. Even if Biden has a majority both in the Senate and the House and if he has the media, Big Tech, the courts and Big Pharma in his pocket, we don’t know what he will accomplish.

I have something really funny for you. Look underneath at this tweet! There are no people attending Biden’s inauguration, because no-one is interested. His people of course try to cover that by saying they keep the Covid rules and stay home, but the truth is no-one wants him as their president. So they have put flags … :

Something I find a lot less funny is the fact that Mr. Mike Lindell, CEO of a company called “My Pillow” and who spoke out about the fraud by Dominion Voting Systems, is being sued by Dominion. These crooked criminals say Lindell is holding a smear campaign against them. Well, if they don’t want people to say about them that they’re fraudsters, then they shouldn’t commit fraud … The proof is overwhelming, even that China is involved. What I am even sad about, is that Dominion’s CEO has been found and that he is Greek. What a shame for my country! John Poulos: those Greeks who shorten their names when going to the US and who are considered traitors by the rest of us. Poulos is half a name! What would his real name be? Yannopoulos? Grigoropoulos? Vassilopoulos? Poulos means ‘son of’ and so this man’s name is ‘Sonof’ instead of Son of Vassilios or Son of Costas or Son of Pantelís. And then this Poulos man. He hid himself until president Trump had been unable to get any lawsuit in court (he didn’t lose them!) and then he suddenly stepped out of the shadows to nail him and his lawyers down. He sued Sidney Powell for $1.3 billion! What kind of a person would do that? Not an honest man …

If you want, you can see the same livestream I am watching on YouTube. Donald and Melania Trump can pass by any minute now and oh yes: they’re in Florida. Yesterday the place where he would be seemed to be in DC, but not today. Fast because he’s coming! At 6:00PM Biden will be sworn in. 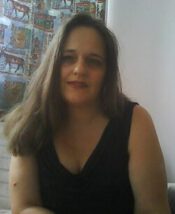